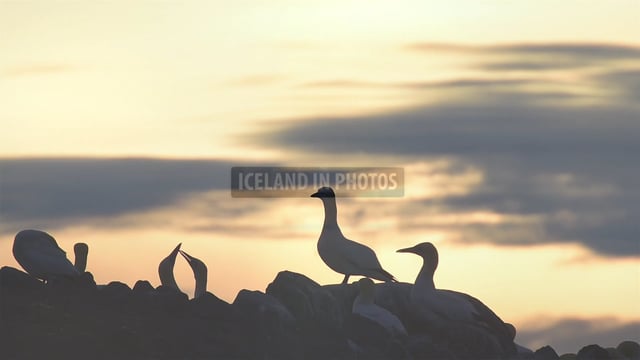 We have gone from Myvatn and headed to Melrakkaslétta in our bird-photography tour. Myvatn is one of the most busy tourist locations in Iceland, but Melrakkaslétta definitely is not. For the past 24 hours we have seen only one car while driving Kopasker – Raudinupur – Raufarhofn.  The past 24 hours have been a bit like being alone in the world.

We spent last night at Raudinupur and Núpskatla in Melrakkaslétta. When we got to Raudinupur a group of photographers were already there, speaking unknown language, all of them with big lenses aimed at the Gannets.  We all had a great time there in the sunset.

The area is great for bird photography, not only because of the Gannets in Raudinupur, but also puffins and many other species near the shore.

The following video is our iPhone footage of the past two days. It´s not possible to include the photos we took since we are on the road and the video is only edited in Iphone 6s plus. These iPhones are great, but as you can possibly hear Gyda comment on in the video, her iPhone 6s died – again – even though the battery had 50% left. This may sound as a minor problem, but it is serious when flying our Phantom 3 Pro drone. The iPhone 6s plus turned off with 60% battery left when flying the drone but luckily we could land the drone without display. Don´t get this wrong, I am a fan of iPhone´s – but I don´t trust them any more as displays for the drone. Both of our iPhones turned off despite celsius on the plus side. I am probably going to get a iPad to work with the drone – and hope they work better.