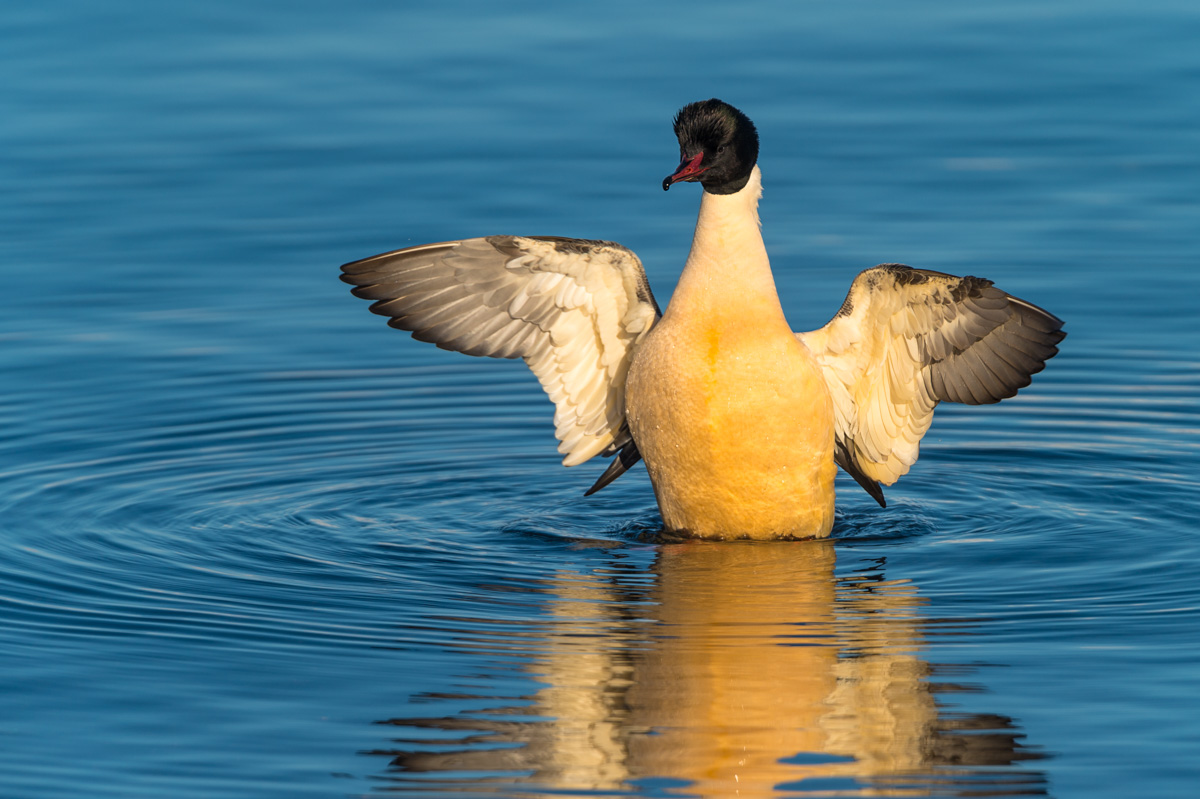 The common merganser (North American) or goosander (Eurasian) (Mergus merganser) is not so common in Iceland as the name suggests. The population is less than 1000 and it is protected. Being a very shy duck it stays the whole year in few locations. Since February is not exactly the best month of choice for birding or bird photography in Iceland I was surprised to find six males and one female sleeping in the sea near Akureyri. They were in the same location I photographed them for the first time in 2007, the 9th of February to be exact. This seems to be the same family of birds even though it´s only my guess. As I mentioned they are shy so I have not gotten many chances to photograph them. Seeing a group of them is always news. Finding them in the same location, same time of year makes one think it´s the same family.

The day is getting longer after a long winter. The sun is low on the horizon and coloring everything smoothly. Typical for the end of February as seldom as we see the sun. I spent three hours watching the group sleeping. They did not see me even though I was quite close since I had the strong sun in my back. The males had one eye open once in a while and it was interesting to see how agitated they got if the distance between them got too personal. There is obviously a power structure in the group. The female seemed happy with the company of the males.

The males slept for a while. Woke up and started to clean the feathers, rubbing the head repeatedly in weird positions over the body. The low angle of the sun did explain why these ducks are called “Yellow ducks” (Gulönd) in Iceland. They are obviously yellow when the sun shines on them. In flight they seem to be white and it is only under certain light conditions which the yellow color is obvious.

This frame is one of my favorites. For most species it is difficult to get both the male and the female in the same frame showing the main characteristics. This is one reason why I envy geniuses and artists (like my friend Jón Baldur Hlíðberg at www.fauna.is) who can draw the positions and surroundings they like. I used f10 to have both of them in focus. Going up to f16 was an option, but it´s easy to say once the opportunity is over.

They were very relaxed and it was obvious that my presence was not disturbing them. I was probably within 15 meters.

The males can hear the shutter, but are probably blinded by the sun. The sea was very calm and super blue which made the yellow color of the common mergansers stand out.

Suddenly one of the males in the group points the beak up to the sky in a split-second like a rocket and makes a low but swallowing-like sound. He was greeting another male heading towards the group. Few seconds later the newly arrived male did the same. Pointed the beak up and made the same sound. Soon the sixth male was sleeping with one eye open in the sun.

I had been in the same uncomfortable position the whole time and started to crawl back in the snow without disturbing the sleeping beauties. This was a nice afternoon with the not so common, common mergansers which I am sure is the same family I photographed in 2007.

This is a photo taken 9 years ago 9th of February at the same location. The camera was Nikon D100, a 5 mp monster at the time.