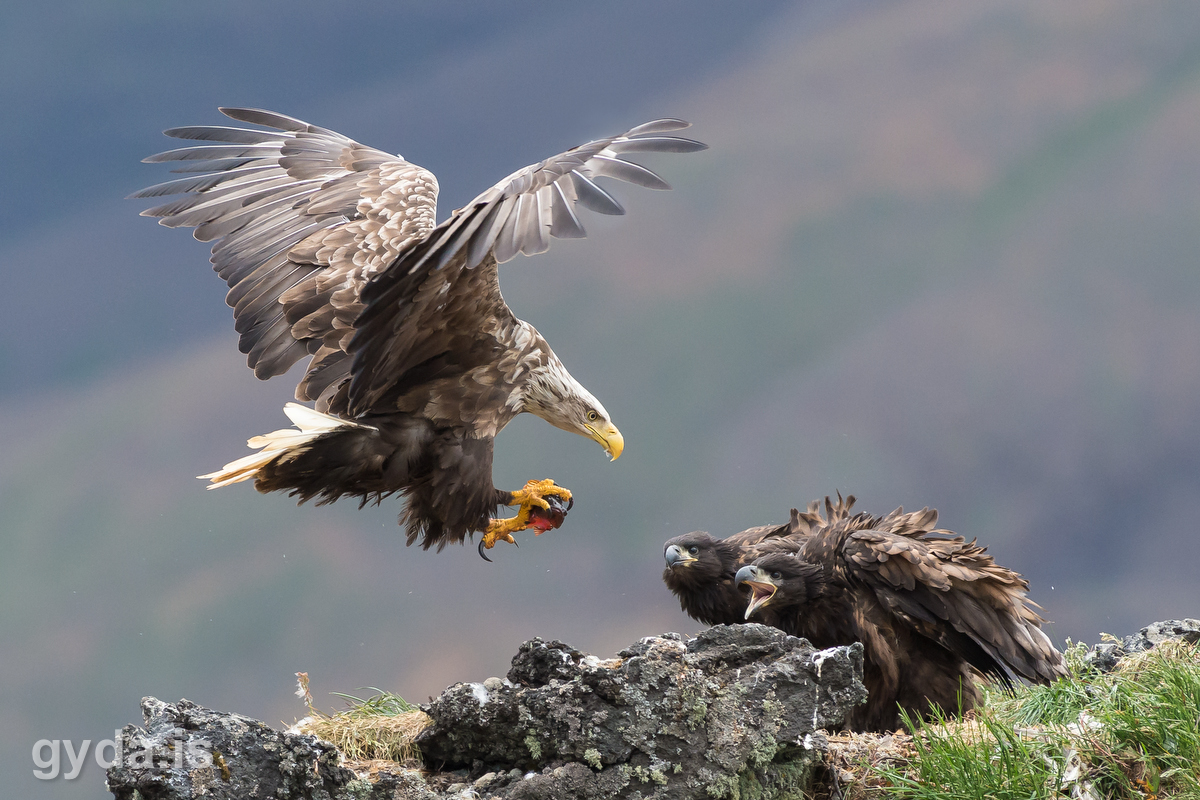 It´s difficult to explain what work is behind some photos. The more the work and effort the more is the sentimental value the photos have. For the photographer. Not others. It´s difficult to explain what is behind the photos to those who have no insight into the world of wildlife photographers. Me and my wife, Gyda are some of the first Icelanders to capture the moment when a sea eagle lands in it´s nest with pray for the chicks . The time we have spent trying to capture this moment is measured in weeks, not days – in a hide, sitting on a uncomfortable chair constantly ready for the silently landing eagle for up to 14 hours a day.

We began to photograph sea eagles some years ago in collaboration with the Icelandic Institute of Natural History. We are working together on a book about wildlife in Iceland. A license is needed for the photography of sea eagles since they are very rare in Iceland. In Norway they are more common and it´s possible to buy tours with guides that feed sea eagles with fish at certain locations. That´s why many photographers have photos of sea eagles in Norway grabbing the already dead fish from the water. In Iceland there is no such thing. Only 80 pairs of sea eagles exist in Iceland and the nesting sites are in most cases in very remote areas. It is obvious that the sea eagle does not like humans and does it´s best to stay as far away from us as possible. Of these 80 pairs only 20-30 have nesting sites each year. Of these only 2 or 3 are accessible for photography which is only allowed with a special license due to the vulnerability of the sea eagles.

This is probably the reason I had never seen a photo of a landing sea eagle with pray when we started to photograph them some years ago. Not in Iceland and actually not anywhere until recently.

Few days ago we visited a nesting site deep inside a lava field. After two hours walk with all the heavy gear we arrived but found out that the only possible angle to photograph the nest was facing the sun. The nest was surrounded by a brush with a small opening. Still we spent 8 hours sitting silently in the hide and another two hours walking back. No photos were taken that day.

Fortunately not all days are like this. The photo above is taken by Gyda Henningsdottir (www.gyda.is) when the male eagle arrives with a male lumpfish (Cyclopterus lumpus).  From our experience the sea eagle in Iceland brings fish at least two thirds of the time for the young. The lumpfish was still alive and kicking when it arrived in the nest facing the two hungry sea eagle chicks.