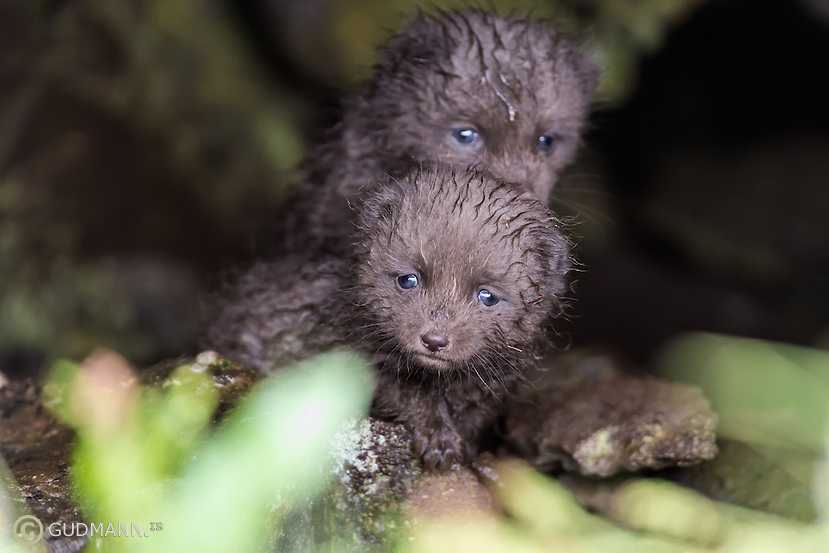 Most Icelanders have never seen a Arctic fox in nature. Many tourists and photographers go to Iceland without ever seeing one. This is probably mostly because in most parts of the country it is only searching for food in the middle of the night.

Few days ago I was searching for a fox den when I heard cubs inside a cave. The den was in a lava field with many cave openings, but the cubs could not be seen even though I waited for a while. It was 20th of june and most cubs should be big enough to go out of the den. These did not.

The day after I went back to the location. It took up to an hour to walk to the location. This time the cubs could be seen peeking out to the big bright world, but still they did not go out of the dim cave. There is no denying how cute they are. Wet after two days of rain, but now the sun was out shining on their cuteness. This brings up the thought that this is the high-season for Icelandic fox hunters. They go to all known den´s and kill all the foxes and cubs they can. To my understanding and knowledge Iceland is the only country in the western world that allows hunting of foxes and cubs during breeding time. Most countries ban hunting during this period, but not Iceland. The “need” for fox hunting is a part of the nations soul. Since the settlement farmers have seen the arctic fox as a threat to sheep. Today Icelandic hunters hunt almost 8000 foxes a year.

I was surprised how the camera managed to get focus and little noise in the photos inside the cave. The cub photos are taken at iso 2000-12.800. I don´t see much difference that matters between the iso 2000 or iso 12.800 photos.

Later, after getting back to the location with a tent-hide the adult mother came to the den to attend the cubs. She gave us many chances of a photo and she even came within two meters of our hide. Beautiful animal and it´s behavior even more beautiful. The more I get to know the Arctic fox, the more respect I have for this animal.

More photos in the gallery.