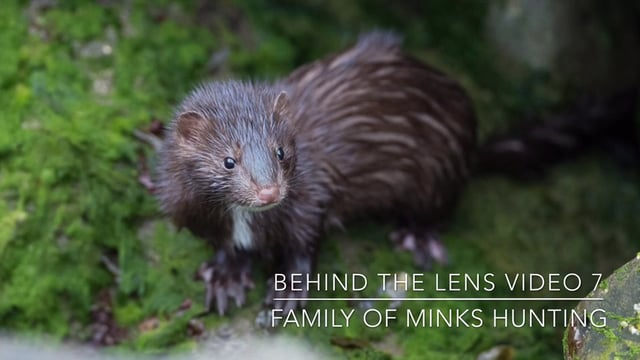 It´s after midnight. The sky is pink in Arnarstapi in the Snæfellsnes peninsula and we are taking landscape photos with our wide angle lenses of the magnificent Gatklettur cliff formation which is full of nesting birds, mostly Northern Fulmars (Fulmarus glacialis). The birds were not our subject of the moment, but suddenly we see a mink (Mustela vison) on top of the rock. It ran between the nesting birds searching for prey. The Northern Fulmar chicks are quite big but the mink showed incredible skills in climbing with them down the cliff biting their neck.

It was not one mink. It was a family of a adult female with two cubs. The morning after it seemed as the female was fighting the typical love/hate fight of minks with a adult male which I think is unusual at this time of year.

It´s not the first time we see minks in Arnarstapi. Actually we see minks often when photographing there but most of the time it´s dark and f2.8 and iso 12.800 have limits.

Minks were imported to Iceland in 1931 due to short term vision of the fur farming industry and is classified as a invasive animal in Iceland. By some considered to be the biggest accident in nature conservancy since beginning of the settlement. The Arctic fox has always been here and has adapted to nature. The mink is a opportunist, invasive and considered to be a greedy animal which might sound familiar – a bit like our Icelandic banking system. Us humans take more from the cruel nature than we think.

The minks went three times up and down the cliff. In the end the two cubs played in the seaweed and the adult female watched them. They seemed to be satisfied with the catch and stopped hunting challenging my idea of the minks mindset.

Inside my head the photographer and the hunter had a quarrel. Like most Icelanders I have been programmed to dislike the mink. In another life I hunted minks and turning the scene into a killing frenzy would have been easy. Today the photographer is stronger than the hunter and the weapon of choice is a camera, reporting nature as is. The importing of the mink in 1931 was a stupid mistake. The mink is our mistake. I have no right to dislike the mink. I dislike the way of thinking that brought it here in the first place. I dislike the way the government is blind against it´s own inability to handle this invasive animal which could easily be done. What I like is to witness the fact that the minks stopped hunting when they had enough to eat in their natural environment. The Banksters would never.